Flowchart States (or simply “States”) are logical states of the finite-state machine defined by a Flowchart. All States are listed in States List dialog.

While the States are the same for all instances of a Flowchart, each instance transitions from State to State independently. 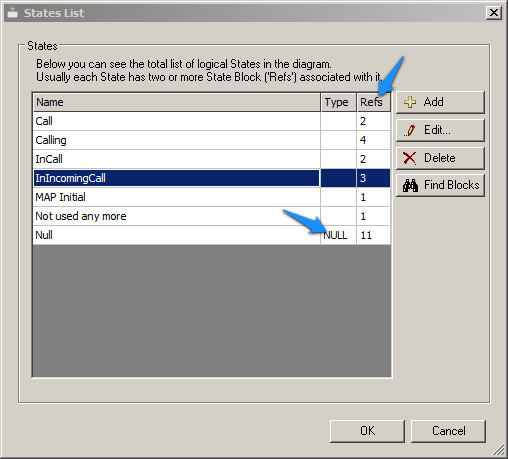 Column Type shows the type of the State. Column Refs contains the number of Blocks associated with this State in the script. If the counter is 0, the entry is colored in red, which means that the State is not used in any Blocks. States with no associated Blocks are inactive.

There are several operations that could be performed through this dialog.

There are two types of States in a Flowchart.

NULL State is a special State. The only instance running in this State is NULL Instance. All other instances stop running upon reaching NULL State.

NULL State is the only mandatory State in a Flowchart. An executable Flowchart should always include a NULL State Block.

When a working instance enters NULL State, it dies. This is a standard way of instance completion.

All the Blocks directly descending from NULL State Block and ready to be executed are executed. The Blocks are checked for execution readiness from left to right.

A State which is not the NULL State is a NORMAL State. NORMAL States are essential for partitioning a Flowchart into easily manageable parts.

Block to execute next

There might be multiple paths for an instance to exit a State. See more at Execution Order.