One can execute a Flowchart step-by-step by repeatedly pressing Step button on Studio toolbar.

Selecting a line in Execution Log highlights the Block that has generated it. 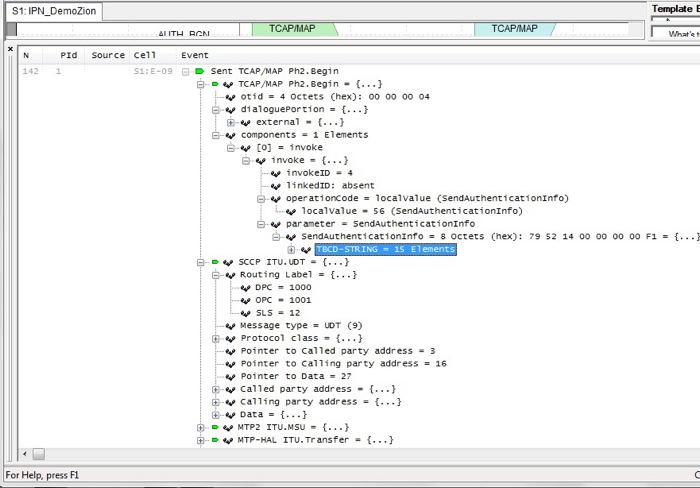 All PDUs sent/received are displayed in a fully decoded form. In order to see the “inside” layers of the message, click on the [+] icon next to the Execution Log line.

A line with a small blue Receive Block icon is added to Execution Log every time a PDU is received by an instance. If the same message to be received by multiple instances, Execution Log includes more blue “Receive” lines than the number of incoming packets processed by the Flowchart.

For a typical scenario, Flowchart should be designed so that each incoming message is handled by a single instance. The easiest way to achieve this is to have a unique Instance Key filter for Receive Blocks in each instance. 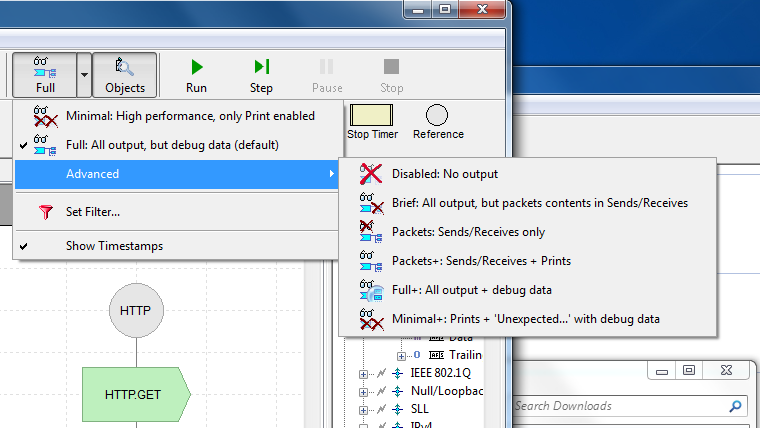 While in an interactive mode one can change the level of output from the main Studio toolbar. Clicking the downward pointing arrow on the right side of Details Level button opens a drop down list of all the supported output modes. One can select the mode manually before the start and change during execution. Only the output data generated after the change is affected. This selection could be dynamically overwritten by the instance themselves during execution.

Debug output slows down performance. For load tests select the “Disabled: No system debug output” option. If some output is absolutely required, minimize number and frequency of your Print operations and choose “Minimal” mode. 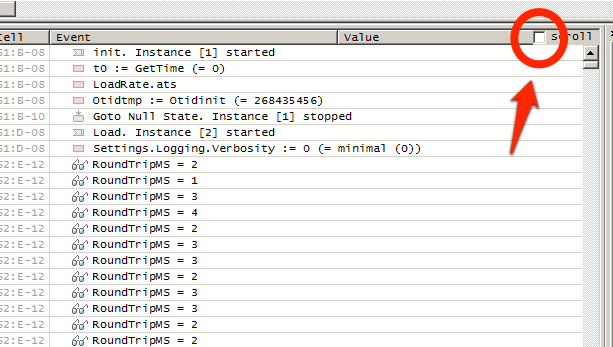 Disable scrolling to maximize speed. Scrolling eats up a lot of CPU time! 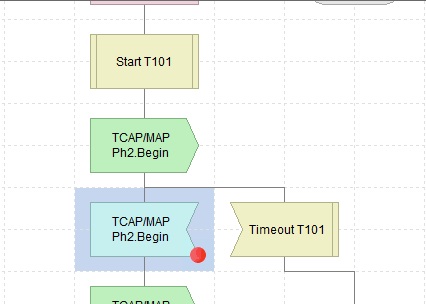 Blocks with breakpoints are visually marked with a red dot. When a breakpoint fires, the associated Block is highlighted.

In Execution Log the trace line generated by a Block with a breakpoint is marked with a red dot. The mark persists after execution continues. This feature provides a complete visual history of breakpoints triggered during script execution.

The pane is used for dynamic display of variables values during run time. Any subset of variables can be selected for watching.

Button Add/Remove opens Variables List dialog. One could select for watching any subset of variables in the list.

The list of variables in Data Watch belong to the IDE itself, not to the Flowchart. If a new Flowchart is opened, variables no longer present in the Flowchart are displayed as “N/A”.

Scroll check box makes the Data Watch scroll to the bottom an additional of new lines. This functionality could also be enabled via Context Menu or with Esc key pressed.

Refresh of Data Watch happens when an instance executes a Block. If a variable changed its value while the Block execution, the variable’s entry in Data Watch list is colored in red. If a value does not change, its momentarily colored in pink, and then changes back to black. This is convenient for step-by-step debugging.

instance Filter is shared with Execution Log. It can be configured via the Context Menu, or by a double-click on the instance number.

In the interactive execution mode, Print command available in Operations Block sends the output into Execution Log at the bottom of the Studio main window. In the batch mode the same output is sent into a console window.

Formatting of the output can be done in two different ways: Auto and Custom.

User supplies a format string similar to the first argument of C programming language printf() function. The string may contain plain text printed as is and the special formatting elements controlling the output form of the Print arguments. If there are more arguments to be printed than formatting elements present in the string, “Auto” mode is used for the extra ones. In this mode there is no difference between “stand-alone variables” and “expressions” output formatting.

The formatting elements have the following form with optional parts in []:

Only Type element is mandatory

Special modifiers not supported by C printf() function. More than one flag can be used.

Mandatory. Determines how an argument is interpreted.

One can print ALL arguments with %s specification, but other types allow some useful options (see above).

In this mode “Print in column” check box is ignored. Instead you can use “ “ sequence in the format string to make a new line in the output. That way one can have any number of lines in one Print output.