This Chapter address how an instance decides what Block to execute next. There are three cases to consider:

NULL State is a special state of a Flowchart. Blocks directly descending from NULL State Block are executed according to special rules.

At the start of the Flowchart execution, Blocks directly descending from NULL State Block and ready for execution are all executed, in left-to-right order.

During Flowchart execution the NULL State Block children Blocks operate is as follows:

Among the paths available to continue execution, an instance takes the one becoming available first. For example, a Flowchart may have multiple Receive Blocks and Timeout Blocks directly descending from a State Block. The descending siblings are checked left to right, and the first one ready to be executed, will be. The first incoming PDU waited for by one of the Receive Blocks determines the path the instance will follow. If no expected message arrived before the timeout fires, the instance takes the timeout path.

Use no more than a single non-waiting (immediately executable) Block among the siblings directly descending from a non-NULL State. 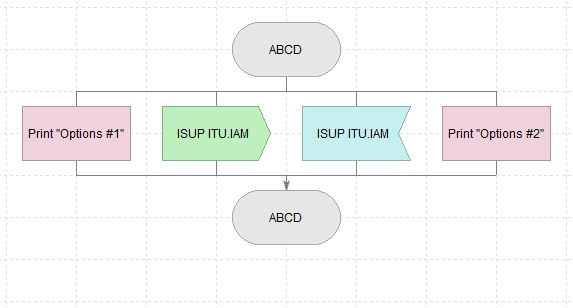 A Flowchart might have multiple ExitState Blocks for a State. The below steps describe how the selection of the exit path happens.

Applicable when the Flowchart has two or more ExitState Blocks for the same State, located on different worksheets. The worksheets are checked from the leftmost (S1) to the rightmost. The first ready to be executed Block gets executed.

Applicable when a Flowchart has two or more ExitState Blocks for the same State on the same worksheet. The Blocks are checked from the left to right. The Blocks with the same X coordinate are checked top to bottom. The first ready to be executed Blocks gets executed.